On February 22-24, 2018, four former UCAM MBA Sports Management students, Jordan Kotsopoulos, Willem Coleman, Domen Irsic, and Mohamed Fouda were reunited again in Dubai for the 2018 U13 Dubai Intercontinental Football Cup.  Jordan was involved as the tournament organizer in Dubai, Willem as the qualifier organizer in Ghana, Domen as a tournament volunteer for both the 2017 and 2018 edition, and Mohamed as a part of the Al Ahly team delegation. The objective of the tournament is to gather youth football players from around the globe to compete in a top level youth tournament, all while promoting team values and valuable life lessons for young footballers. Teams that participated this year included the Spanish Soccer School, Lizzy Sports, Juventus FC, Real Madrid CF, FC Barcelona, and Liverpool FC. Even some LaLiga legends such as Michel Salgado himself, David Trezeguet, Nicolas Anelka, Figo and Christian Wilhelmsson were able to attend.

UCAM Alumni, Jordan Kotsopoulos become involved with the Dubai Intercontinental Football Cup after completing his practical internship in 2016 at the Spanish Soccer School and then being offered a permanent position.  Working under the Director of the Spanish Soccer School and Dubai Sports City, (and former Spanish national team and Real Madrid F.C. player) Michel Salgado, Jordan was entrusted to direct and organize the youth tournament (along with his counterpart Inaki Beni) both for the first edition in 2017 and this year’s 2018 edition.  The 2017 tournament brought in 12 Under-13 teams from the following countries: Spain, Italy, Japan, Australia, Canada, U.A.E, and Angola.  The tournament’s media coverage included live match broadcasts shown on LaLiga, GolTV, Real Madrid TV, and Dubai TV. 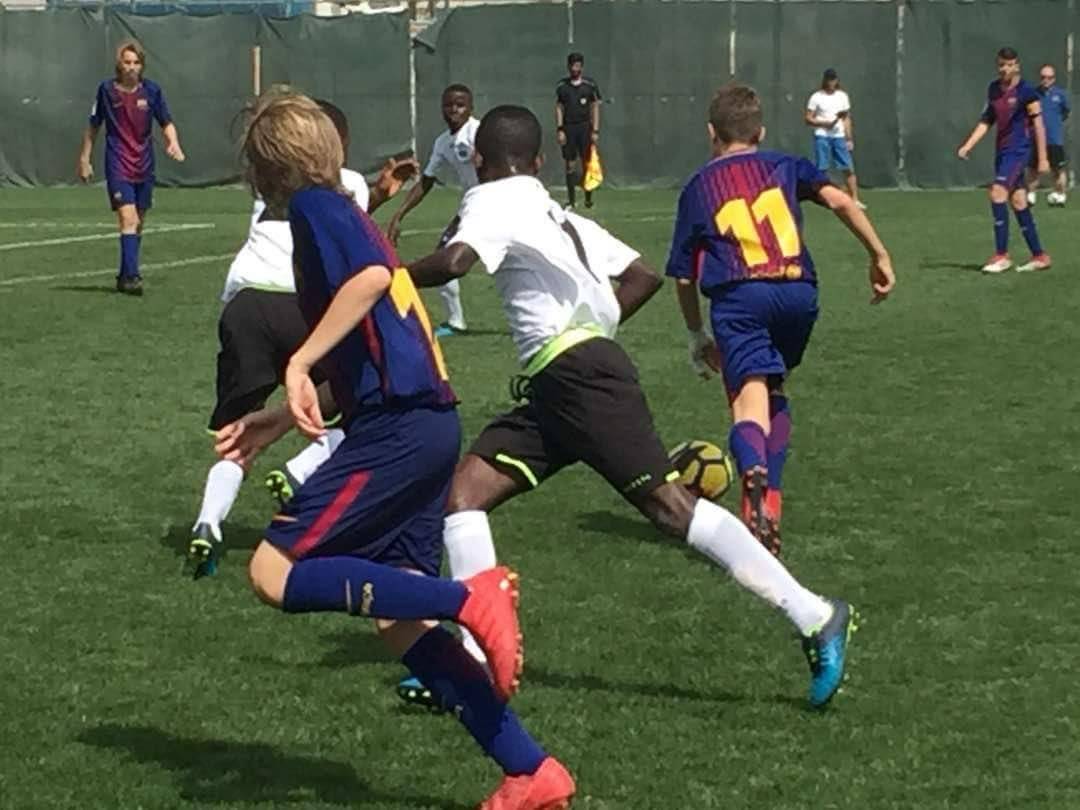 After the major success of the 2017 edition, former UCAM student, Willem Coleman from Ghana heard that the youth team from Angola had competed remarkably well.   Willem contacted his former classmate, Jordan, seeking an opportunity for a team from his country, Ghana, to participate in the 2018 tournament.   Willem, along with his partner, the other co-founder of his company, Centa14 Sports and Entertainment, organized an entire youth qualifier tournament in Ghana and invited the Spanish Soccer Schools from Dubai to take part as guests in December of 2017.  The winning team of the Ghanaian qualifiers went on to earn a spot at the 2018 Dubai Intercontinental Football Cup that hosted 20 teams in total. Competing against teams like Real Madrid FC and FC Barcelona, Willem’s team, Lizzy Sports Academy, performed exceptionally and ended up taking first place at the 2018 Dubai Cup.

Not only were our alumni able to reunite and collaborate on an international project together, but they were able to build lasting relationships with some of the youth players. Both Jordan and Willem mentioned their wonderful experiences meeting players from around the world and one in particular stood out to them, by the name of Sylvester Asamoah from Teshe Mobil, Ghana.  They were able to share Sylvester’s story: “Every Sunday, Sylvester walks two hours from his village to the Lizzy Sports Complex to join friendly football matches with the locals. One night, the coaches and tournament organizers were playing a pick up match after our Ghana Qualifier tournament, and Sylvester walks onto the pitch insisting to play goalkeeper. Who knew he would blow the minds of our coaching staff and Michel Salgado with his incredible goalkeeping abilities?” 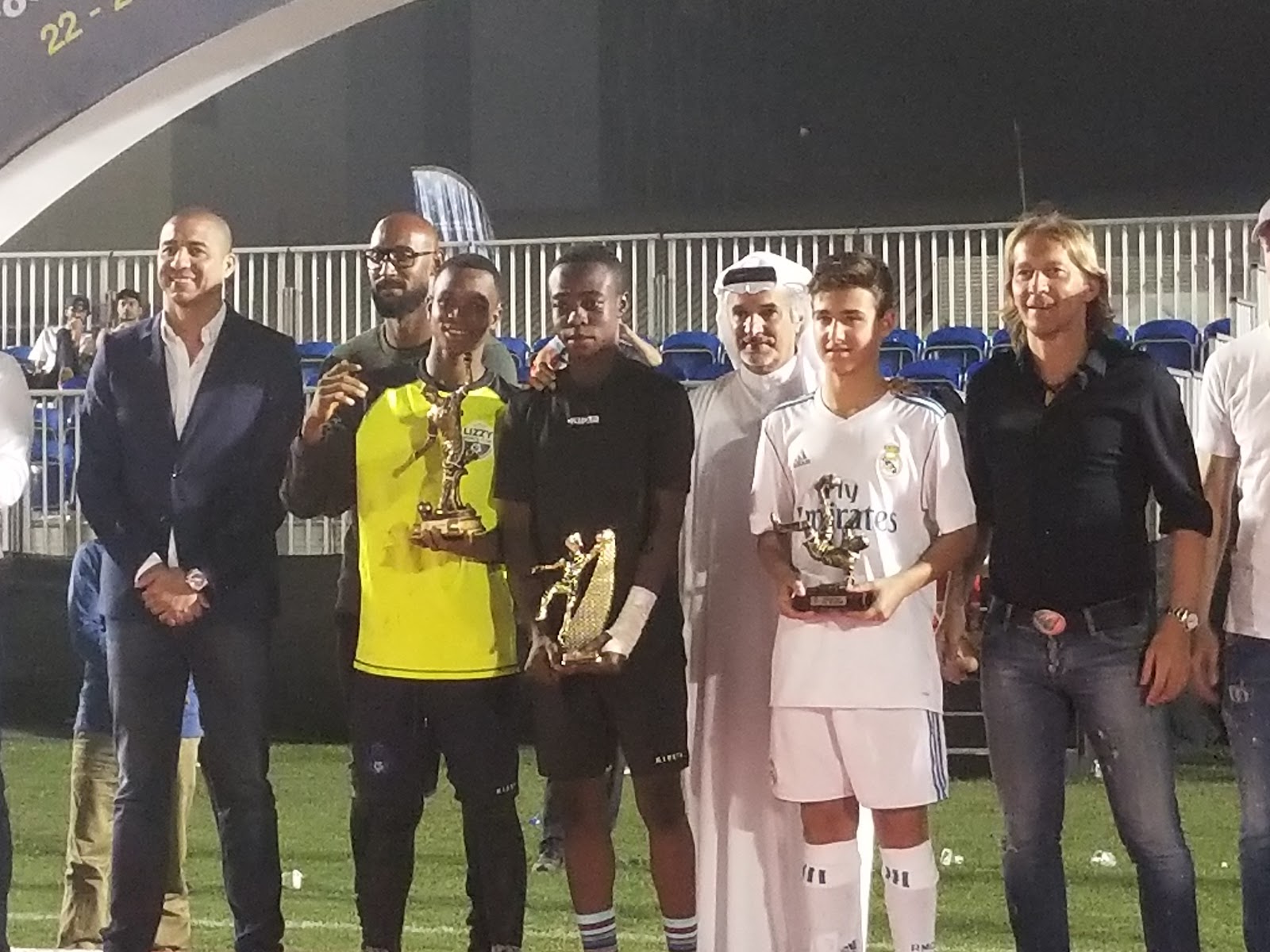 After the qualifier, Sylvester was invited by Michel Salgado to join Dubai Sport City Academy for the this year’s U13 Dubai Intercontinental Football Cup.  His flight was funded by the Spanish Soccer School (SSS) and Jordan hosted Sylvester in his home throughout the tournament. Since the tournament, Sylvester has been asked by the SSS to compete again in the Oviedo Cup and again in the Donosti Cup in Spain this July.  Jordan has also been attempting to arrange an opportunity to fund Sylvester to attend boarding school in Canada.  Jordan added, “This tournament is a vehicle for players to increase the mobility and ease of facilitation from youth football or undeveloped football countries to professional environments. Next year we will open a boarding school and provide scholarships to players like Sylvester.”